Possibly the most significant event for the development of Manildra was the coming of the railway in the late 19th century.  The railway line from Orange to Molong had opened in 1885, and the location of the railway line west – from Molong to Parkes – was the subject of many surveys, enquiries and Parliamentary discussions.  Tenders were called in late 1890, and subsequently awarded to Messrs. Baxter and Saddler.  The line from Molong to Parkes – via Manildra – took three years to construct, at a cost of $713,068; $9,786 per mile.

The Manildra railway station opened on 12 December 1893.  At this time the township was located on the eastern bank of the Mandagery Creek, but following the opening of the railway station the town gradually relocated to the western side of the Mandagery.  Manildra moved into an era of growth and prosperity, and the construction of the Flour Mill a few years later consolidated the town’s position.

A substantial township developed on the northern side of the railway line.  George Griffth and Richard Frogley each built a fine house and store, Henry Townsend established a blacksmith’s shop and dwelling, and Mr Williams built the Royal Hotel.  Businesses were established by W. Breen, Tom Brothers, H. Willis and Tom Denton.

Henry E. Green was the only employee at the Manildra railway station in 1894.  In that year 418 train tickets were sold, 618 tons of goods sent out, and 115 tons brought in.  Ed Taylor was Station Master for many years.
Jim O’Donnell recounts the story of the Manildra Railway Station Refreshment Rooms:

A great character of Manildra was Mrs Price, wife of Jim Price, bush carpenter.  After the official opening of the railway Station in Manildra, Mrs Price got it into her head that Manildra wanted a Railway Refreshment Room.  She used to carry her basket morning and evening down to the train.  She had received permission from the Railway Department, and paid a rental of 1/- a week. 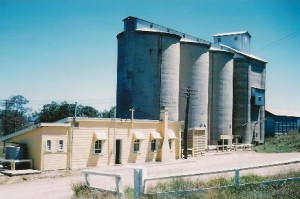 She found that tea and coffee got cold, so she asked the local Progress Association to approach the railway to have a store and table in the Waiting Room for her convenience.  They laughed, as they thought she would quickly go out of business.  But she, never daunted, heard that Sir Henry Parkes would be coming through one night on the train.  All Manildra was out, and presented him with a coop of turkeys.  Mrs Price got a leaf out of an exercise book, and wrote a bit of a petition on it, and walked right up to his face and said. “Sir Henry, will you sign this petition, please?”  He said, “My good woman, I do not know if I am in a position to do so.  What is it?”  She told him of the inconvenience of the Refreshment Room, “I have been asking these blockheads (pointing to those present), and they will do nothing for me”.  Sir Henry took out his pocket book, and took particulars of her requirements, and before a fortnight, tradesmen were along and everything was fixed up.