The first Manildra district casualties of the Great War were Norman Glen, who died of illness at Cairo on 24 March 1915, and Cyril Read, who was killed in action at Gallipoli on 25 April 1915.  Before the war’s end some 4½ years later no less than 43 men associated with the Manildra district would lose their life in the conflict, with many more suffering injuries prior to their return to their homeland.

Following the Armistice on 11 November 1918, many communities turned their thoughts towards building memorials to honour those who served during the Great War, many having given the supreme sacrifice.  Early in 1919 the Manildra community considered the matter.  Suggestions included establishing a memorial park, or a monument at the intersection of Kiewa and Derowie streets.  A Soldiers’ Memorial Hall was considered by the newly formed local RSL, and a site near the railway station suggested.  Many thought the project to be beyond the financial resources of the town and district.

Land for the hall was eventually obtained in Kiewa Street when – thanks to Mrs Emma Griffith – the site of the Griffith family tennis court was made available.  Funds were sufficient to enable tenders to be called for the construction of the building.  The hall would contain a School of Arts, a large hall, stage, dressing rooms, supper room and kitchen.  The project was now seen as ‘a tangible tribute by the people of the district to its sons who fought and suffered and sacrificed themselves to ensure that nation’s safety in the Great War’.

In May 1925 Arthur Cole’s tender was accepted and by late September work had commenced.  The foundation stone for the hall was unveiled on Remembrance Day, 11 November 1925 by Member for Calare, Sir Neville Howse VC.  Sir Neville was a decorated medical officer and a veteran of both the Boer War and World War I.  Mr Claude Miller was the MC for the ceremony, while Mr Wren Murray gave the address.  The ceremony concluded with the singing of the National Anthem and was followed by afternoon tea provided by the Women’s County Party.  An appeal for donations during the afternoon realised contributions of £1,037 ($2,074) towards the building costs.  Later in the afternoon political speeches were held in the street and a dance and concert was held that night at McGirr’s Hall.

By March 1926 the new hall was nearing completion.  On Sunday 25 April 1926, Anzac Day, a United Church service was held at 11am at the newly completed hall, with soldiers, family and friends invited.  It was hoped that the hall would become the location for all future Anzac Day services in Manildra. 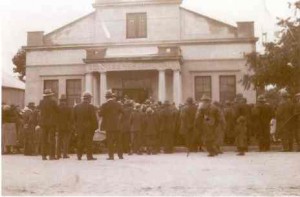 The following day, Monday 26 April, Mrs Churchill of Brymedura officially opened the Memorial School of Arts.  Sir Neville Howse had been invited to perform this duty but at the last moment had to send his apologies.  A large crowd was in attendance at the opening and at the conclusion of the ceremony Miss Ada Giffin was presented with a handsome oak writing bureau and an autograph book containing signatures of 200 of the hall subscribers.  This writing bureau is now in the possession of Mr Ian Giffin.

The first ball of the season was held at the new hall that evening, and on the following evening a dance was held for the district’s children.  The community could be proud indeed as the hall had been built and furnished and was practically free from debt.

Mr Claude Miller was elected as the first President of the Soldiers’ Memorial Hall and Miss Ada Giffin as the first secretary.  There are however, no records to hand for the years 1926 to 1959.

In 1959 a kitchen upgrade and septic system were suggested, and in the same year the Regional Library Committee was asked to establish a branch library in the hall.  In 1960 the trusteeship of the hall was handed over to Boree Shire Council (now Cabonne Council).

The Junior Famers’ Club donated in excess of £450 ($900) to the hall in 1961-1962 and these funds were later allocated to the kitchen upgrade.  Early in 1962 the Shire presented plans to the Committee for hall extensions and alterations.  Also during 1962 the library book collection was donated to the Red Cross.

By May 1962 a WWII memorial had been erected in front of the hall.  The Windus family donated the WWII Honour Roll and drinking fountain in memory of 24 year old Flight Sergeant Keith Neville Windus who was killed in action during WWII, on 27 November 1943.

During 1976 the “Back to Manildra Week” Committee made a substantial donation of $1,370 to the hall and this money was used to install heating.  Major works were carried out in 1996 and 2004 to upgrade the ladies’ and gents’ toilets, and to provide internal access to both amenities.

A local committee still manages the day to day activities of the hall.

A plaque commemorating the war service by men and women of Manildra and district was unveiled on 25 April 2006 by Peter Andren MP, Member for Calare, on the 80th anniversary of the opening of the hall.

Further information can be found at: