George W. Griffiths who served as President [of the Baptist Union] for the year 1909-10 was the first country layman to serve in that position.  He was a General Store Keeper at Manildra and was an officer in the Manildra Church.  Mr Griffiths was born in Birmingham (12 December 1860), the second son of Mr Henry Griffiths, a wholesale manufacturing jeweller.  George was educated at Edgbaston College, Birmingham, and attended the Mt Zion Chapel.  He came to NSW in 1885 and married a Miss Miller of Cumnock.  He settled at Garra (15km west of Molong) as a farmer.  At Garra there was a meeting of Baptists, one of several such in the district, associated with the Orange-Spring Hill Church.  Rev. A.J. Clarke, visiting the district on behalf of the Union in October 1888 set aside a young preacher, James Worboys, as Pastor for these western Churches and formed a membership of 21 members at Garra as a branch of Orange.  The first baptism conducted by the newly appointed pastor, George Worboys, was at Garra and the candidate was George W. Griffiths.  Mr Griffiths proved a dedicated member and became a deacon of the Church, serving at various times as lay preacher, Secretary, Treasurer and Elder of the Church. When the railway line was extended from Molong to Parkes Mr Griffiths decided to relinquish farming and set up as a storekeeper at one of the railway stations.  He selected the township of Manildra as the site for his store, opening it in 1887. 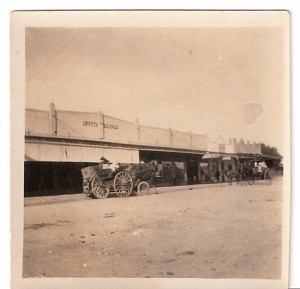 In 1890 a Church building was erected on a property of a Garra deacon, Mr Pocknall.  As this was nearer the township of Pinecliffe the Garra Church became known as the Garra-Pinecliffe Church and then just as Pinecliffe.  Another group of Baptists was meeting in homes at Gregra between Pinecliffe and Manildra.  In 1892 a small building was erected there and a year later a Sunday School was commenced with 25 scholars.

The Superintendent was G.W. Griffiths, the teacher of the Senior Bible Class was A.J. Waldock and the third teacher was Mr F. Goodman.  Mr Waldock who was an employee in Mr Griffiths’ store later became a Baptist minister, Home Mission Superintendent, President and President-General.  Mr Griffiths gave much consecrated service to the Baptist denomination in the Western Districts and is often mentioned in reports from those centres.  His wife and he were widely respected for their interest in community affairs.  Mr Griffiths was secretary and later president of the Manildra Show Committee, a member of the School of Arts Committee and of the Progress Association.

Congregations at Baptist services in Manildra varied greatly as there were strong Church prejudices in the town.  No Baptist building was erected there until 1909, opening on 24 November 1909.  In the previous month the pastor, Rev. W. Coller, moved from the manse at Garra to his own home in Manildra.  As a result of these two events Manildra became the centre for the Manildra and Garra-Pinecliffe circuit of churches.

At the beginning of his presidential year Mr Griffiths made a tour of the Churches in the south-west of the state.  On 25 August 1909 he shared with the Home Mission Secretary in the opening of the manse at Brocklesby and visited the township of Walla Walla where the Goombargana Church had an outstation.  He was greatly taken with the prospects there and opened a general store there.  One of his daughters married a local farmer, William Odewahn, who was a stalwart of the Walla Church for many years.

When the Great War broke out in 1914 he wished to play his part and joined the Red Cross, his area of service being back in England.  In January 1918 it was reported that he was seriously ill in Birmingham with influenza.  He died on 23 March 1918.
Bibliography:
Watkin-Smith, H 1997, ‘Concerning Presidents from Country Churches’, The Baptist Recorder: The Journal of the Baptist Historical Society of New South Wales, no. 3 of 1997, July 1997, pp.4-5.