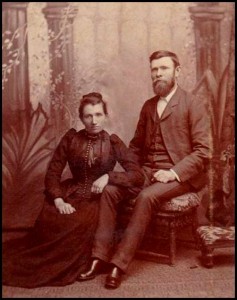 Dennis Toohey was born in Galway, Ireland, in 1848. When Dennis was orphaned at ten years or age he travelled to Melbourne to join his older brother, Jeremiah. The brothers tried their luck in the Victorian gold fields near Beechworth, and, in 1861, journeyed on horseback to Forbes.

In 1864 Dennis – an accomplished horseman – undertook a contract to operate the mail coach three times a week between Orange and Parkes, a distance of 70-miles. Toohey was paid £10 a week from his mail contract, and charged 35/- for a passenger fare between the two towns. He established the Coach and Horses Hotel at the half-way point of Manildra, a business that he operated for 13 years. [The hotel later became known as Westphalen’s; it was demolished sometime after WWII, having lain derelict and fallen into disrepair.]

In November 1878 the Central West was inundated with torrential rain; low lying dwellings were swept away and two men drowned. The newly built bridge on the Parkes to Orange road was submerged by more than a metre of water, and mail deliveries in the district were severely disrupted. Mr Toohey, however, was determined to deliver his mail on time; he swam 100 yards across the Mandagery Creek, and 300 yards across the Bundagundry Creek to do so.

Dennis Toohey later moved to Parkes, where, in 1889, he built Tattersall’s Hotel, which he and his wife Elizabeth operated for many years. The couple later leased the Commercial Hotel at Peak Hill and the Vandenberg Hotel in Forbes.

By all accounts Dennis was a generous and charitable family man with a wide circle of friends and acquaintances. He died in Parkes in October 1925, aged 77. In his obituary the Western Champion claimed: “He was a man of unimpeachable integrity, of a most kindly disposition, with a good word for everyone.”