Manildra is a township beyond the great divide,
A little west of Orange and on the Parkes road side.
We love our sport and freedom
And a few beers at the pub,
Or a few bob on the horses, or the pokeys at the club,
We all work together for Church and sport alike,
And everyone seems happy and seldom want to fight.
We are a peaceful living village, as our records seem to show,
And the history in this booklet is something you should know.
Those of us who wrote it, have done our very best,
So we hope you will buy a copy
And keep it in your chest.

Issued by the Australian Workers’ Union.

THIS AGREEMENT IS ENTERED INTO BETWEEN THE PARTIES UPON THE BASIS:

“FOUND”
“NOT FOUND” in a joint mess
“NOT FOUND’ in a separate mess
THE WORDS STRUCK OUT SHOULD BE INITIALLED BY BOTH PARTIES.

1 The employment under this Agreement shall in all respects be carried out in accordance with the Pastoral Industry Award, 1950, as varied and adjusted from time to time
2 (1)  The employee shall shear with all reasonable dispatch and in a good and workmanlike manner, all the sheep which the employer shall require him to shear at Dellerigibal [sic] station, at the shearing beginning on the 1st day of August 1957.
(2)  The employee will be at the station ready to begin work on the 1st day of August 1957.  If he is not ready to begin by noon on that date the employer may treat him as having repudiated this Agreement and shall not be bound to keep any pen open for him.
3 (1)  The total number of sheep to be shorn at the shearing will not be less than 16,000 and not more than 30,000, including no more than 2,000 studs and the maximum number of shearers to be employed shall not exceed eight.
(2)  Subject to this agreement, the employer will be ready to commence shearing on the 1st day of August 1957, and will keep the employee fully supplied with sheep until the completion of the shearing.
But the employer shall not be bound to furnish the specified minimum number of sheep, nor to be so ready, nor to so keep the employee fully supplied, if prevented therefrom by fire flood, drought, strike or other cause unavoidable by him; provided, however, that the employer shall inform the employee, as soon as is reasonably possible, whether, and to what extent, he will be or is likely to be so prevented.
Provided also that where the employer is a contractor shearing (crutching) sheep under contract with an owner or his agent, the failure of the owner or his agent, except from a cause specified in the first proviso of this clause, to keep him supplied with sheep for shearing (crutching) shall not be deemed to be a cause unavoidable by the contractor.

4 (1) The employee will not absent himself from his work during the hours of work except in the case of his illness or except as hereinafter provided.
(2) He may be discharged by the employer for any breach of his Agreement, or he may leave in consequence of accident, sickness, or other urgent necessity, or with the permission of the employer.
Permission to leave for any reason not set out in this sub-clause will not be given to a shearer without the consent of the majority of shearers and woolpressers remaining.
(3) In case of leaving or discharge as aforesaid the employer will pay the employee in full to the extent of the work done by him after deducting any sums for which the employee is liable to the employer under this Agreement (and, if the employee is ‘not found’ of the mess remaining fix for his share of the mess to the date of leaving and the amount deducted shall, after payment of the cook, be placed to the credit of the mess account).
(4) When no other means of conveyance is available the employer shall provide transport free of cost for the employee in the case of serious illness or accident to the nearest hospital or medical assistance, and in the case of discharge to the nearest mail route.

5 The employer will pay the employee at the following rates:
(i) If “Not Found” –
(Insert appropriate rates, as set out in Clause 12 of the Award).
(ii) If “Found” –
An amount calculated at the “Not Found” rates, less the sum of £7.12.3   % Flock  per week for cook and rations [SEE OVER]
(iii) Payment for Delays –
Amounts payable under Clauses 33 and 44 of the Award for delays due to breakdown or failure of machinery and for delays in payment of wages shall be at the rate of        per day if “Not Found”, or      per day if “Found.”
SIGNED by the said Employer     R RYAN
In the present of R B GUNN 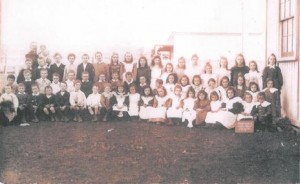 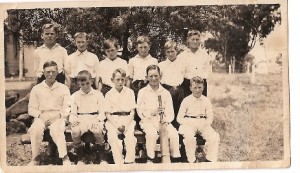 Earliest Manildra cricket teams that can be traced go back to 1895. There were teams at Gregra, Garra, Meranburn, Red Hill and Manildra. Early names known are Jack McArdell and Ted Allen. END_OF_DOCUMENT_TOKEN_TO_BE_REPLACED 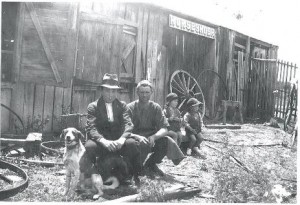