The earliest settlers in the Manildra district utilised buckets to draw water from creeks and wells.  Later water was drawn from underground by windmills.  Drinking troughs assured water for stock, and household water was stored in galvanised tanks attached to houses and sheds.

The installation of the tap was a great step forward, but even then, water had to be heated for bathing.  This was done on a fuel stove, in kerosene cans or the famous old black kettle.

Women in childbirth were attended by local midwives.  Two early midwives remembered in Manildra were Mrs Priddis and Mrs Cole.  Lovel Rubie recalls, “Mrs Priddis would move in and take over.  It was very reassuring”.

In the case of serious illness there was the daunting prospect of travelling to Molong by horse vehicle in order to consult a doctor.

Possibly the most significant event for the development of Manildra was the coming of the railway in the late 19th century.  The railway line from Orange to Molong had opened in 1885, and the location of the railway line west – from Molong to Parkes – was the subject of many surveys, enquiries and Parliamentary discussions.  Tenders were called in late 1890, and subsequently awarded to Messrs. Baxter and Saddler.  The line from Molong to Parkes – via Manildra – took three years to construct, at a cost of $713,068; $9,786 per mile.

The Manildra railway station opened on 12 December 1893.  At this time the township was located on the eastern bank of the Mandagery Creek, but following the opening of the railway station the town gradually relocated to the western side of the Mandagery.  Manildra moved into an era of growth and prosperity, and the construction of the Flour Mill a few years later consolidated the town’s position. END_OF_DOCUMENT_TOKEN_TO_BE_REPLACED

The earliest settlement in the Manildra area was in the 1840s.  By the 1870s the population of the area had increased significantly as new arrivals and their families settled along the banks of the Mandagery Creek and its tributaries, the Garra, Gumble and Meranburn creeks.  Many settlers had very little schooling, but were determined to provide their children with the benefits offered by an education.

Teachers at these early schools were largely untrained, having been appointed by a local committee.  Children walked to school, sometimes large distances, through bushland and across creeks to attend class.  The buildings were primitive, built predominantly of slabs and bark.  An extract from the periodical The Sketcher states “there is a Provisional School conducted by Mrs Peglar in a hut in Kelly’s paddock near Parkes Road…It was painful to see so many children cooped up in so miserable a crib, the teacher scarcely finding standing room herself and the blackboard near the fireplace…there being considerably more than the average number of children on the roll, 55 as shown by the roll book”.

The Manildra Public School opened in 1882 with a total of some 25 pupils.  It was located adjacent to the Anglican Church, on a rise in the bend on the eastern side of the Mandagery Creek.  Miss Mary Powell was the first teacher, and her weekly pay was 8/-.  Miss Powell resigned later in the year, and was replaced by Miss Mary Ann Bates (sister-in-law of anthropologist Daisy Bates).  By late 1883 enrolments had increased to 59, with an average attendance of 45.

Although the school building was large enough, it was oppressively hot in summer and, since there was no heating, very cold in winter.  A tender was called in February 1884 for the construction of a new school building at an estimated cost of £250.  In November 1884 the new school opened at its current location in Molong Road.  It was a wooden building with a curved roof and a tiered floor, capable of accommodating 56 students.  It became known as the “butter box”. 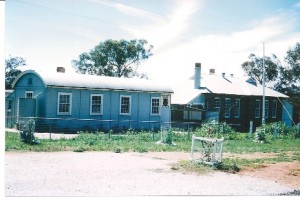 In late 1885 Miss Bates was forced to leave due to ill-health.  She was replaced in early 1886 by Mr Isley.  With an enrolment of 52 students Mr Isley applied to employ a second teacher, and Mrs Kerr was subsequently appointed as a needlework teacher with a monthly salary of £1.

In December 1888 the Under Secretary for Education recommended that a residence be erected and a married teacher be appointed.  Construction work ensued, Mr Isley married, and he and his wife took possession of the new residence in July 1889.  The following decade saw fluctuating enrolments and a certain level of instability, as teachers continued to be plagued by ill-health.

The twentieth century heralded a period of stability and steady growth to the school.  In 1900 school inspector Mr G.W. Thomas recommended that the building be extended to accommodate the increased number of students.  This was done, but by 1907 enrolments had increased to 97, and space was again an issue.  Inspector Mr F. Skinner recommended that new buildings to accommodate 150 pupils be erected.  A large new brick building opened in 1910, and a third teacher appointed.

By 1920 the enrolment at Manildra Public School was 135, with an average attendance of 89.  By 1945 average attendance had risen to 99 and the school was declared a Central School, since it catered for secondary school students.  Headmaster Mr Eric Botts, proposing to give the school new spirit in accordance to its rise in status, wrote a school song incorporating the school motto “Nulli Secundas”:

In 1948 Mr Eric B. Dandie was appointed as school principal for a seven year term; he had a team of ten teachers.  This was a period of steady growth for the school that continued through the 1950s and into the 1960s.

Enrolments peaked at 165 in 1965, and lack of accommodation again became an issue.  A new brick building comprising a kindergarten and composite art/general classroom was constructed at a cost of $34,739.35.  It was opened on 24 September 1966 by Sir Charles Cutler, Minister for Education.  It was during this period that The Winding Creek Chronicle, the annual school magazine commenced production.

In 1975 the Department of Education decided that it was more viable to convey Manildra’s secondary school students to Molong to complete their education than to maintain Manildra as a Central School, and the school’s status reverted once again to a Primary School.

In 1982 Manildra Public School celebrated its centenary.  At this time Mr Des Killiby was the principal, and there were six other teachers plus two ancillary staff and two cleaners.  There were 116 students enrolled.  The Parents and Citizens Association and the centenary committee coordinated several fund raising events throughout the year; the major celebrations took place on the weekend of 22-24 October.  The crowd of over 1,400 people that attended the celebrations exceeded all expectations.  The program commenced with a barbeque lunch at the school on Friday 22 October, followed by a bus tour of the district visiting the sites of the early provisional schools.  On the Saturday a parade of decorated floats, horse drawn vehicles and vintage cars travelled through the town to the school.  Celebrations at the school were many.  They commenced with the school bell being rung 100 times, and included folk dancing, a maypole dance, performances by the school choir and recorder groups, tree planting and the sealing of a time capsule.  The Hon G. Brenner, MLC, gave the key address and unveiled the school’s centenary plaque.  A formal dinner at the Soldiers’ Memorial Hall that evening was attended by 450 people.  On Sunday a church service was held at the school, followed by lunch.  Centenary celebrations concluded with an old time sports afternoon.  Games included marbles, conkers, egg and spoon races and horse shoe throwing. 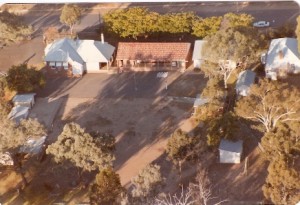 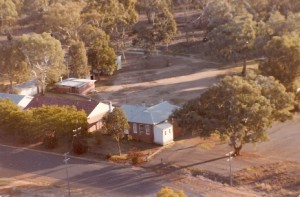 RULES FOR WOMEN TEACHERS – 1915
1 You will NOT marry during the term of your contract
2 You are NOT to keep company with men
3 You MUST be at home between the hours of 8.00pm and 6.00am unless attending a school function
4 You may NOT loiter down town in ice-cream parlours
5 You may NOT travel beyond the city limits without the permission of the Chairman of the Board
6 You may NOT ride in a carriage or automobile with any man unless he is your father or brother
7 You may NOT smoke cigarettes
8 You may NOT dress in bright colours
9 You may, UNDER NO CIRCUMSTANCES, dye the colour of your hair
10 You must wear AT LEAST two petticoats and your dresses must NOT be any shorter than 2” above the ankles
11 To keep the school room clean you must
• Sweep the floor at least once daily
• Scrub the floor with hot soapy water at least once a week
• Clean the blackboard at least once a day
• Start the fire at 7.00am so that the room will be warm by 8.00am

Mr G.M. Strom was one of Manildra’s most progressive citizens.  He saw the advantages of the availability of electricity, and he had the courage and enterprise to bring it to Manildra.  He set up a generator in a shed and set about installing the new system into homes.  When demand grew, he installed a second generator and employed two men, Archie Smith and Tony Minciotti.

He ran the scheme for a number of years, until it was absorbed by the larger scheme sponsored by Boree Shire.

He continued to work for the Shire as a maintenance engineer.

The coming of electricity was “an indispensable adjunct to progress” according to the Molong Express.  Manildra owes it to this man, who had the foresight to bring an improved quality of living to the townspeople.

Unfortunately Mr Strom was electrocuted in 1942.  The following article is from the Molong Express, 31 December 1942.

“A gloom was cast over the community (Manildra) on Thursday last week, when the news of the tragic death of Mr G.M. Strom, the popular proprietor of Manildra Motors, became known.  He was engaged in cutting off the power at the residence of the public school, which was undergoing repairs, when he received an electric shock, which caused him to fall a distance of 20 feet to the ground”.
Bibliography:
Stapleton, Hazel 1982, Manildra on Mandagery: town and district, Hazel Stapleton, Cudal N.S.W.