The residents of Manildra and District were greatly shocked and grieved to hear of the sad death of Mrs Amy Newlove FROGLEY, the dearly loved wife of Richard FROGLEY of Manildra, and the daughter of Mrs and the late Mr Richard Bradley, for many years residents of Garra and Molong and lately of Mosman, Sydney.

The sad event took place at a private hospital at Glebe, Sydney, on Friday morning on the 20th instant, after an operation for appendicitis.  The deceased lady was spending a holiday in Sydney with her husband and relatives and was in the best of health. END_OF_DOCUMENT_TOKEN_TO_BE_REPLACED

The circus came to Manildra about once a year and it was a big thing those days and I don’t think anyone missed out on seeing it.  They used to have the circus opposite Allen White’s house on the vacant block.
There was a weir near the recreation ground and people used to swim in it years ago, but it was broken after a big flood came down, I think in the early 1940s.  The main swimming hole was behind the railway station or near the Bridges.
Once every now and then we would make up our mind to go crayfishing and everyone would get packed up and away we would go.  We’d find a good dam and tie meat to some string ion a stick in the ground and it was on. END_OF_DOCUMENT_TOKEN_TO_BE_REPLACED

The passing on, at his residence, Cudal Street, Manildra, on Wednesday afternoon February 26th, of one of the best known and oldest residents of this district in the person of Mr Henry Burgess.

The deceased who was aged 86 years, had been failing in health for some time past, so that his demise was not unexpected by his relatives. END_OF_DOCUMENT_TOKEN_TO_BE_REPLACED

This series of photographs shows the pulling down of the Leitch shed in 1989 to make way for a new shed which was constructed in 1990. The work was done by Darryl and his sons. The shed is now part of the Rural Centre in Derowie Street. 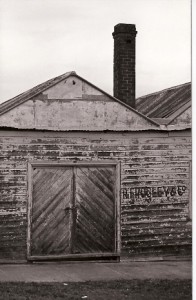 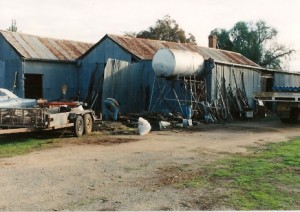 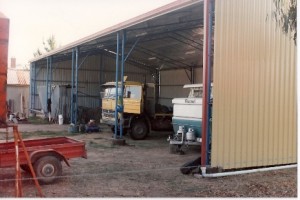 Beryl took photos of the old Scout Hall  in the 1980s before it was demolished to make way for a new Hall. 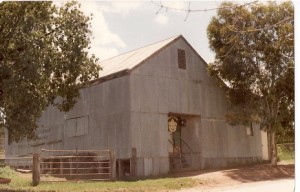 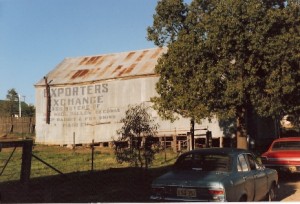 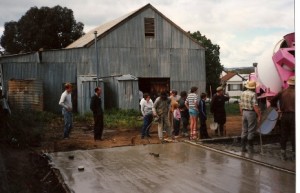 The slab for the new Scout Hall was laid by the Lions Club in October 1986.  It was opened debt free on 9 April 1988.  All voluntary labour was used.  Scouting movement was strong and Don Sutton was the local leader for 40 years.  Three Leitch children were involved in Scouts and Beryl was catering cook. 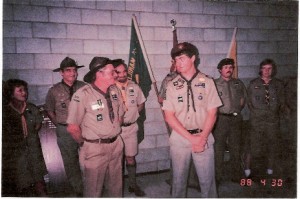